Rolling green lawns and colorful showy blooms highlight the San José Municipal Rose Garden. In fact, hardly a day passes when some species is not in full bloom, with more than 3,500 plantings and 189 varieties featured.

San José's 5 1/2–acre Municipal Rose Garden – a one-time prune orchard – is today one of the most attractive of its kind in the world, drawing thousands of visitors each year. The garden is exclusively devoted to shrubs of the rose family and features over 4,000 rose shrubs with 189 varieties represented. Hybrid–teas comprise 75% of the plantings. These shrubs are characterized by a single high centered bloom per stem.

Visitors to the Garden can also expect to see floribundas, which have clusters of blooms per stem; grandifloras, which are taller than hybrid-teas and feature both clusters and single bloom stems; miniature roses; climbers, a rose variety that sends out long canes, which are trained up onto the fences surrounding the Garden; and polyanthas, low growing rose shrubs with clusters of small flowers.

Visitors can enjoy colorful, showy blooms throughout the April to November season. A favorite time to visit though is early May when the acres of fragrant, majestic roses are at their most beautiful stage.

San José's Municipal Rose Garden is also home to newly hybridized rose and new rose varieties. In fact, the All-American Rose Selections, a national independent rating organization sends the new varieties to the Garden for testing before release to the general public. The roses are tested in areas like health, amount of blooms, color, form and unique qualities of bloom, before being accepted as a new variety and released to the public.

Visitors to the Garden will note that a detailed map of plantings (inside brochure and posted in the Garden) lists hundreds of varieties with names ranging from "Bon Bon" to "Voo Doo" and "Olé" to "San José Sunshine."

Rose hybridizers who develop new varieties choose the names for their creations, which are then submitted to the International Rose Registration Program of the American Rose Society, which has cataloged over 15,000 varieties.

The Garden has a natural grass stage surrounded by a cathedral of redwood trees and a view of the roses. This area of the Garden is available for wedding ceremonies. The Garden is operated and maintained by the City of San José.

The Garden was championed by early members of the Santa Clara County Rose Society, and on November 20, 1927, the San José City Council voted to set aside 5 1/2 acres of an 11–acre tract of land at Naglee and Dana Avenues just outside of downtown San José and the Rose Society pledged to provide roses for the Garden. Groundbreaking took place April 7, 1931, and six years later, on April 7, 1937, the Rose Garden was officially dedicated.

Many of the Garden's original features including the reflection pool in the center of the structural entrance, garden vases, the two-tiered water fountain, miniature rose beds and arbor have been donated through the years by the community and the Rose Society.

Consider having your wedding at the San Jose Municipal Rose Garden. 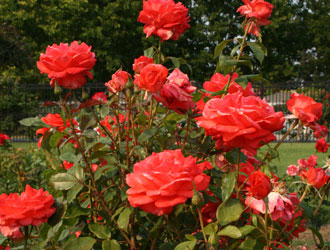 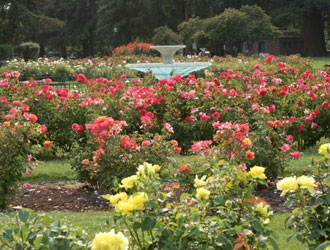 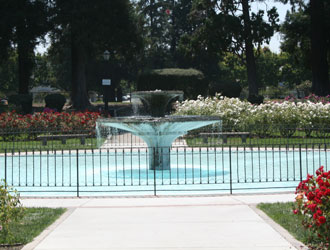