It’s summertime, which means paving season is in full swing in cities around the country. Here in San José, we’re working on a huge, 100-mile paving program (see Transportation > Pavement news category for updates) for 2018. As has been the case for several years, bike lanes will go in as part of many of those paving projects. But in addition to our standard and paint-buffered bike lanes, this year the City is embarking on a first: a grid of protected bike lanes and intersections in the downtown area, and true bike boulevards (safe and calm routes that prioritize people walking and biking) connecting them to adjacent neighborhoods. Intersections are being redesigned to accommodate safe left turns for people riding in the protected lanes and avoid right-turn collisions between people driving and biking.

We’re calling this project “Better BikewaySJ.” Over the course of two paving seasons, San José will build a safe, comfortable, connected network of bikeways designed to appeal to the “interested but concerned” crowd. In addition to bike journeys, Better BikewaySJ will also provide safe routes for thousands of daily e-scooter trips now whisking people across town. The network consists of roughly two miles of standard bike lanes, three miles of bike boulevards, and five miles of protected bike lanes. It’s being built out through “rapid implementation” – in other words, paint and plastic, rather than slow and costly concrete. 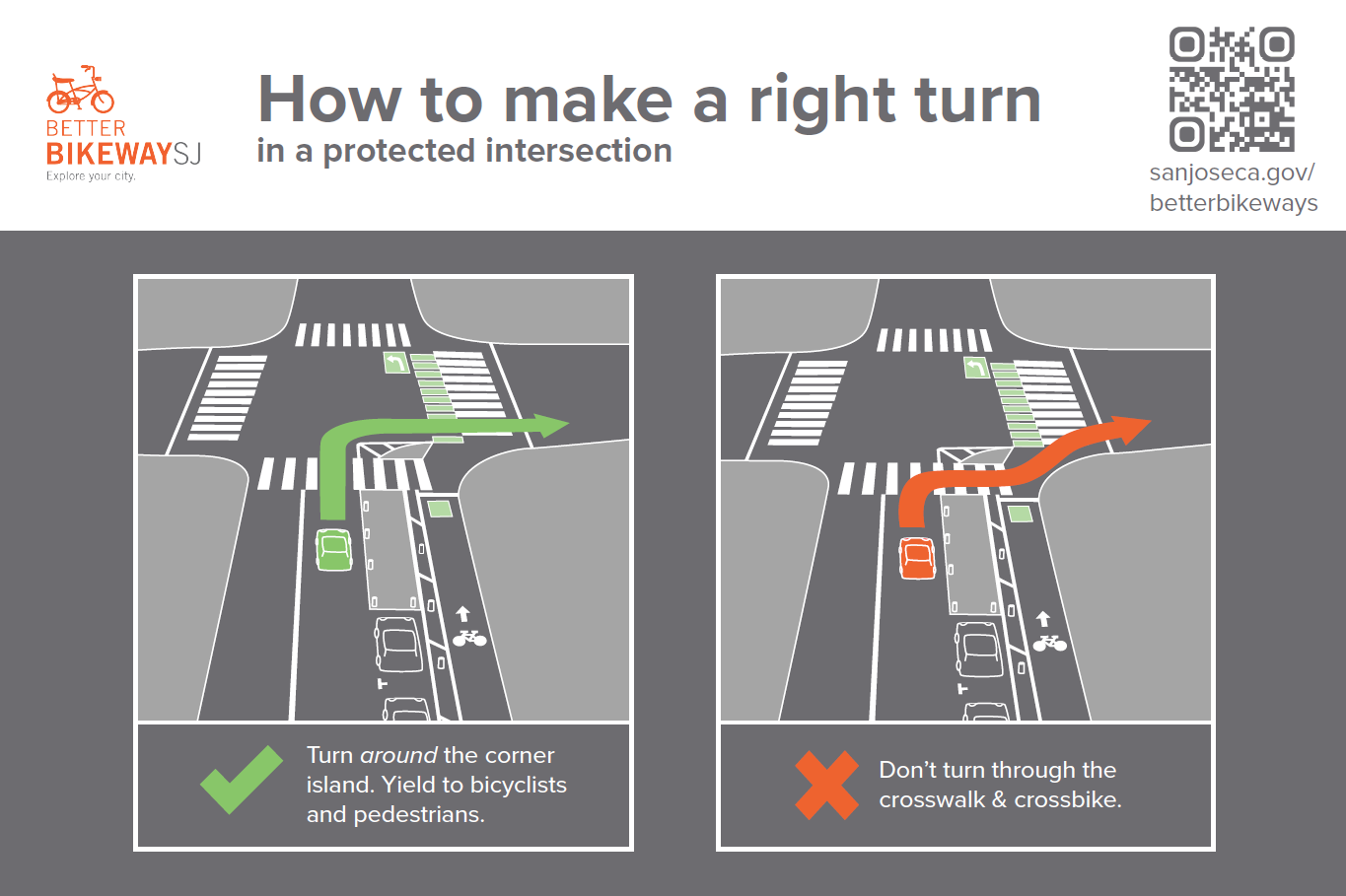 But even the rapidest implementation takes time. Paving of the Better BikewaySJA sign showing how to use the new street design network streets began at the end of August and is still happening today. Immediately after a street gets paved, reflective tabs are installed to give users of the road the basic information they need about lanes, intersections, and crosswalks. Soon after that, thin, temporary striping called “cat tracking” is painted. Engineers then go out to every project site, measure the cat tracking, and compare it to the plans. Once approved, permanent striping can go down, followed by markings like bike stencils and green paint. Special truffle-colored paint will follow, marking no-go areas around protected intersections and creating bulbed-out corners for pedestrians. Then, plastic bollards and signs will go up. In this case, we need a LOT of bollards, so they’re being installed incrementally. Finally, special features like traffic diverters and transit boarding islands will be installed.

The whole process will likely be a couple of months from start to finish. In the meanwhile, there may be some confusion. Already we’ve heard concerns related to moving traffic, parked cars, and rolling dumpsters. We’re aware of these challenges and are addressing them. Because it’s simply not possible to install all the features along every mile at the same time, there will need to be patience and compromise. For example – we will be installing rubber curbs in some buffer areas so that dumpsters can be placed outside of the bike lane. But until those curbs get installed, dumpsters will have to be left in the bike lane so that they don’t roll downhill. Fortunately, wide painted buffers will give people on bikes a place to ride around them without having to enter moving traffic. 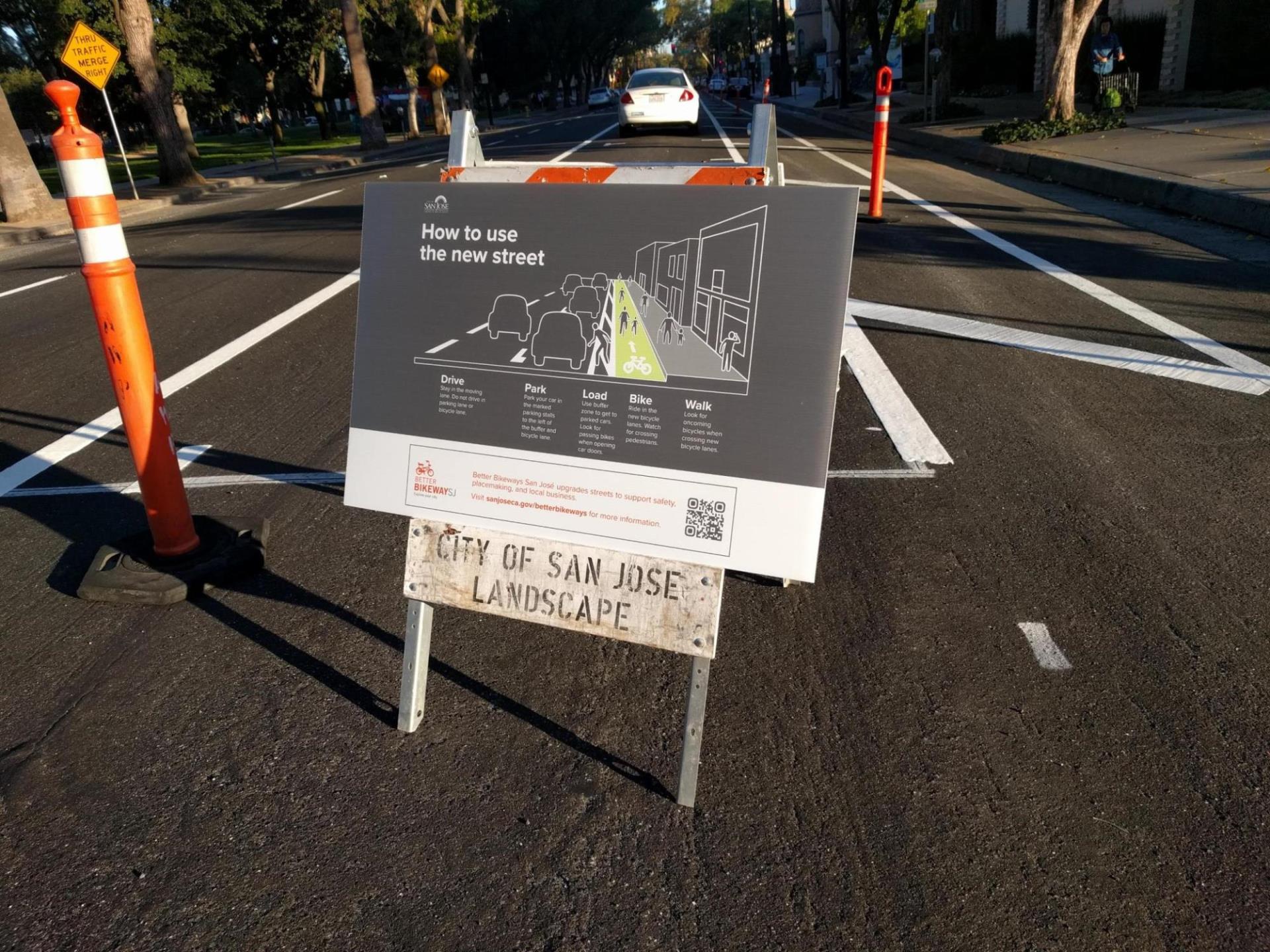 San José has gone through challenging changes in infrastructure before. This time around, most of the bike infrastructure is an upgrade, not wholly new. Still, we urge everyone to be cautious and neighborly while this metamorphosis takes place, and keep on keeping calm while people who walk, bike, and drive get used to the new normal. Thanks for your patience while we undergo some major work to reach our city’s goals of safety and reduced reliance on the automobile.