The City of San José has a shared vision for its Downtown. Read our new brochure to see what San José is becoming!

The Downtown Vision is rooted in the San José Envision 2040 General Plan, adopted in 2011 by the City Council, and in the Diridon Station Area Plan, adopted in 2014. In crafting these plans, City planners synthesized the voices of thousands of residents, business associations, and San José leaders and partners. A 2018 Downtown Stakeholder Summit also contributed to the vision. 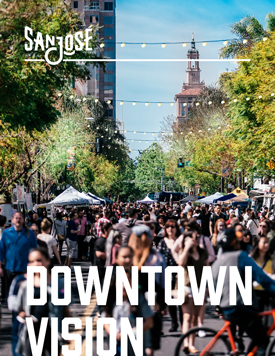