As a vital business and residential center, Silicon Valley requires a modern, state-of-the-art treatment plant to reliably clean its wastewater. The Facility is addressing this need through its Capital Improvement Program (CIP), rebuilding infrastructure worn from over 60 years of nonstop service, and updating treatment processes with exciting new technologies.

The CIP plans, designs, and constructs projects recommended by the 2013 Plant Master Plan, which envisions $2 billion in Facility investments over a 30-yearspan. The first phase is a 10-year CIP with $1.4 billion of improvements, which started in July 2014.

Installed in the 1960's and 1970's, most of the RWF controls are in poor condition. Original manufacturers also no longer provide support for the outdated equipment. New, reliable controls are vital to maintain effective process control. And reliable controls will ensure that the RWF continues to meet the requirements of the National Pollutant Discharge Elimination System (NPDES) permit.

This project will replace aging and outdated RWF control equipment such as flow meters, valves and actuators, and sensors. This project is delivered through the design bid-build approach and in two phases. 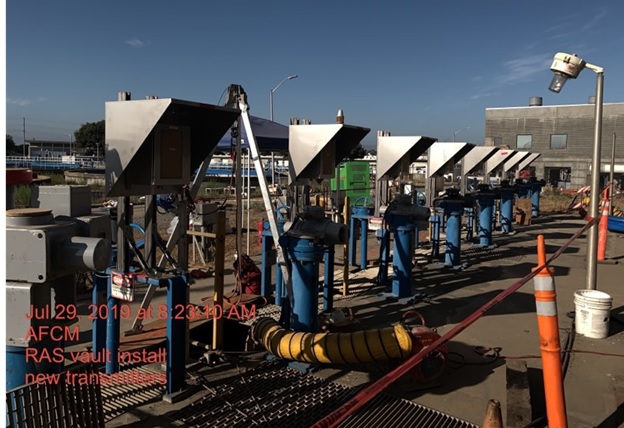 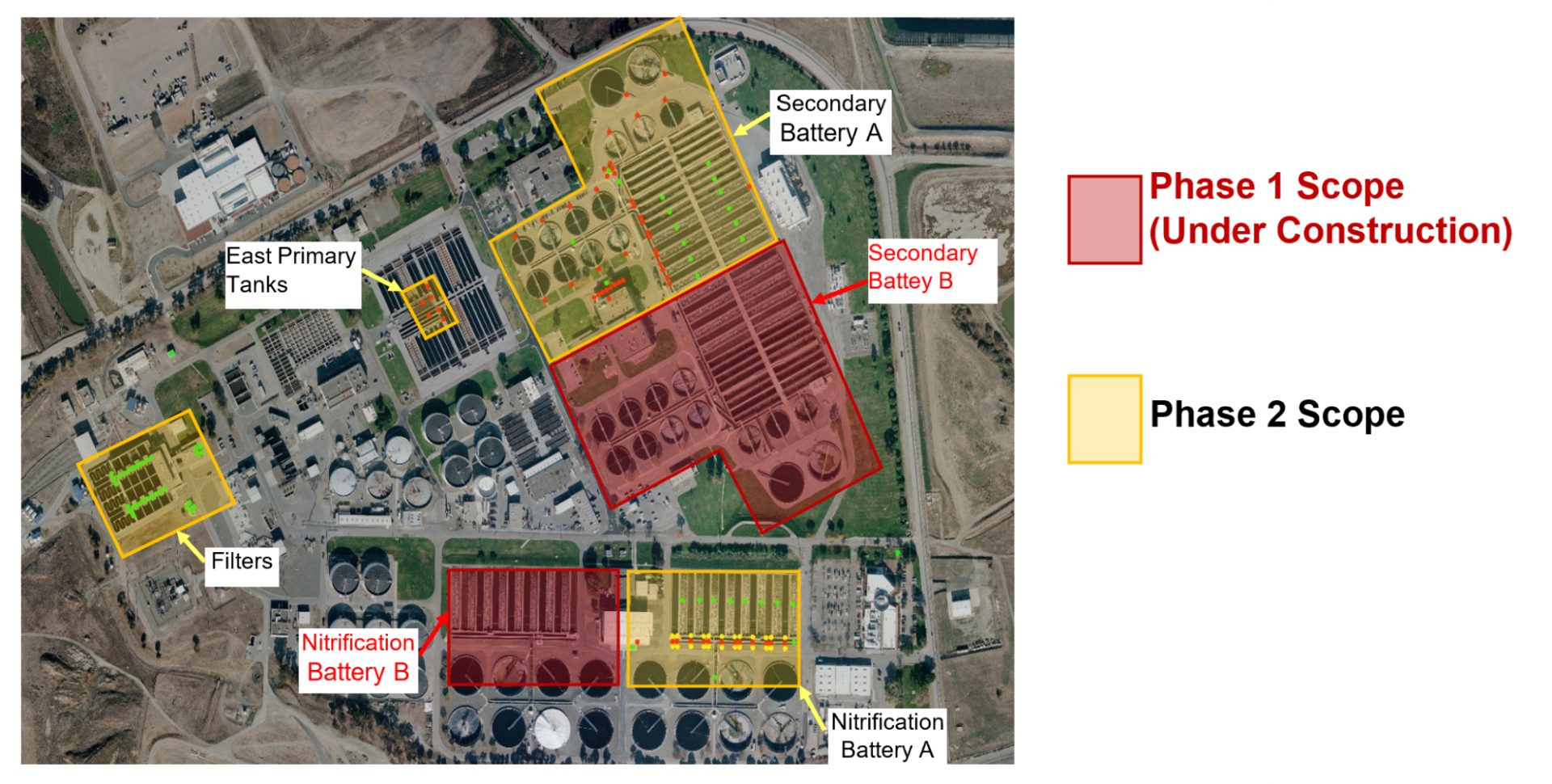 RWF's aeration blower systems supply the oxygen that is essential for the breakdown of organic material in wastewater. The existing blower systems are more than 30 years old and in need of rehabilitation. This project will replace blower engines, gearboxes, and associated control equipment. The improvements will extend the useful life of the RWF's aeration system and enhance its energy efficiency. 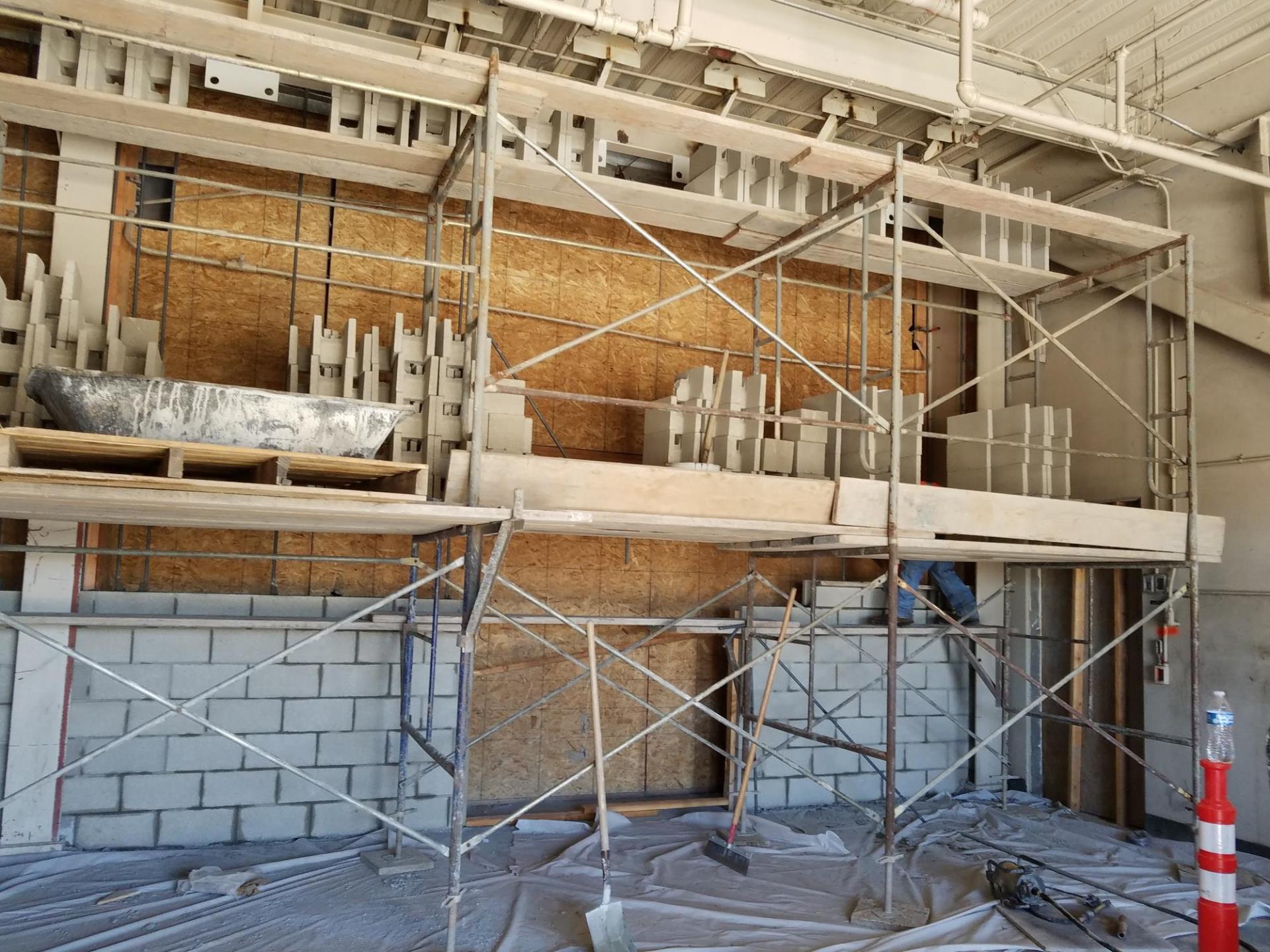 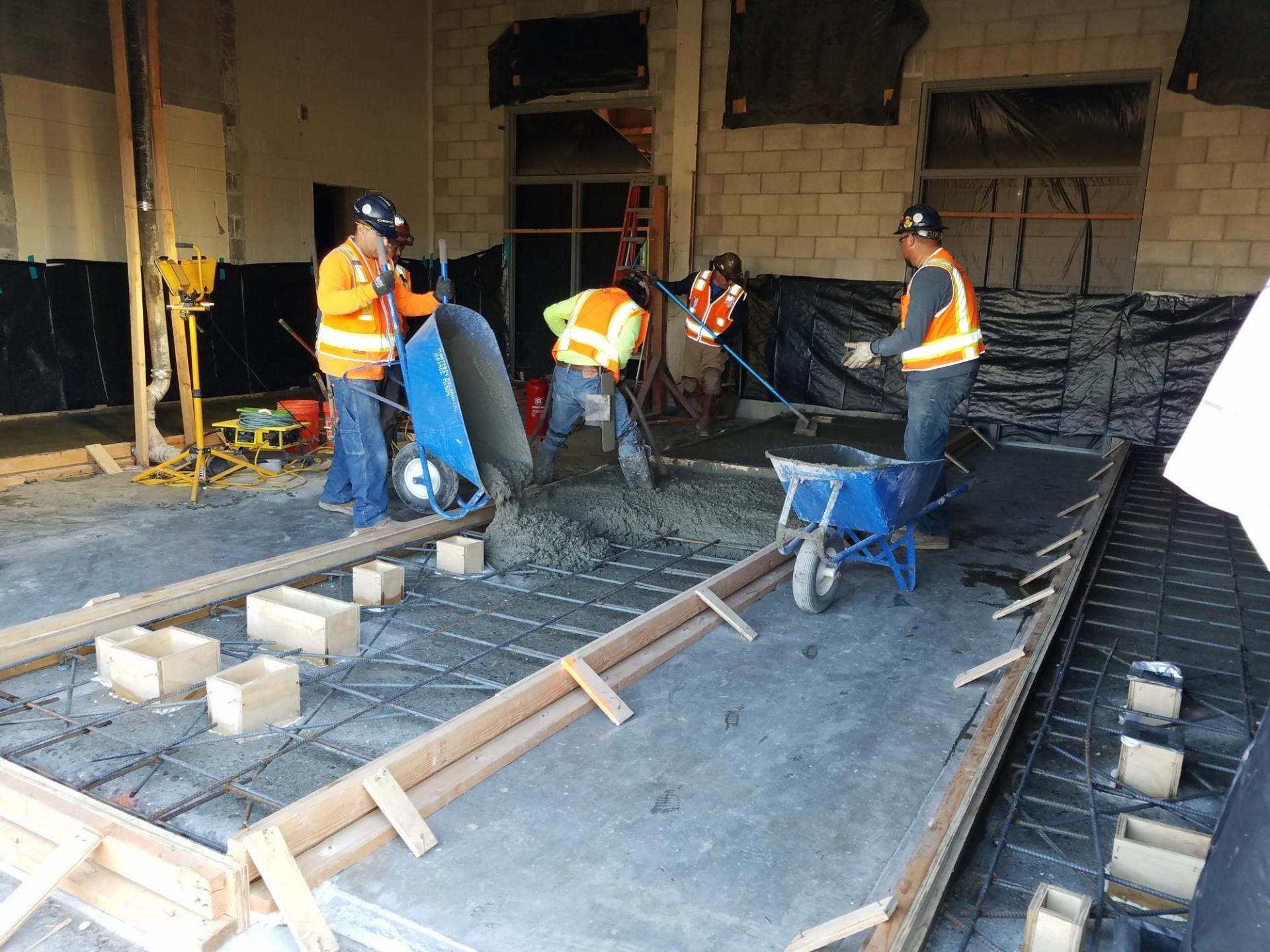 In 2012, the City completed an Energy Management Strategic Plan. This Plan identified a need to upgrade and improve the RWF's aging power equipment. Most of the existing power generation equipment are more than 35 years old, and past their useful life. Also, RWF's power and heat demands are expected to rise in the future as population increases in the service area, and treatment processes are upgraded.

This transition would allow the RWF to

The project will build a new mechanical dewatering facility and associated support facilities. The project is delivered through the progressive-DB approach.

The RWF generates power from biogas produced in the anaerobic digestion process. Built between 1956 and 1983, some of the RWF's 16 anaerobic digesters have structural damage or mechanical failure.

In 2014, City Council approved the Biosolids Transition Strategy. One of the recommendations was to convert four digesters to a high temperature process known as Temperature-Phased Anaerobic Digestion (TPAD). Currently, all 16 Digesters use a lower temperature digestion process called mesophilic. The TPAD process would improve gas production, reduce sludge volume, and reduce the number of required digesters.

Besides upgrading the four digesters, this project will also: 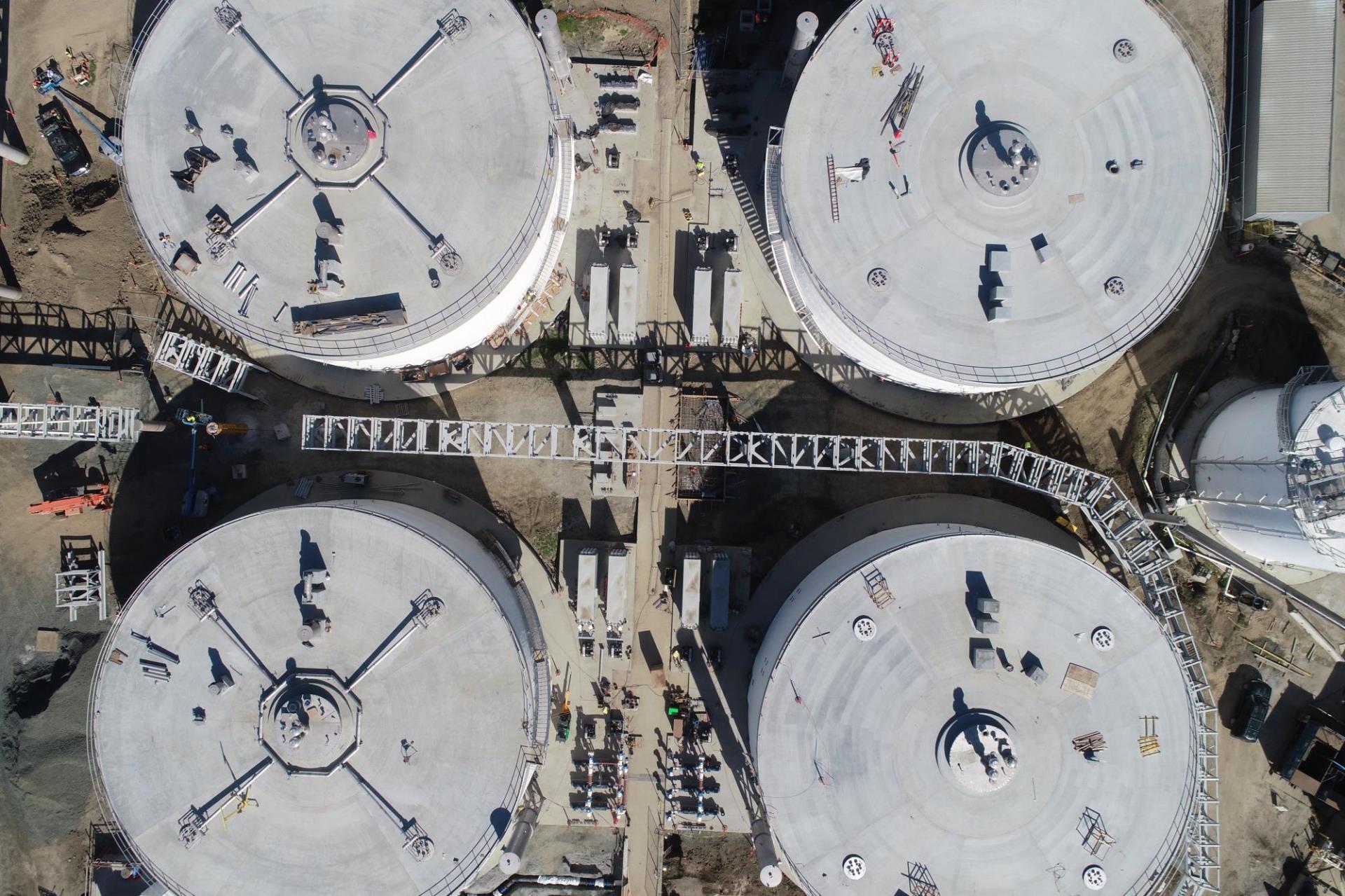 The RWF's main operational area is approximately 150 acres and houses unit treatment processes and more than two dozen support building facilities. The support buildings are now between 30 and 60 years old.

In late 2011, a Fire Code Compliance Gap Analysis study identified fire code compliance gaps and fire risk potentials in most of the support buildings. Since 2012, RWF staff have implemented standard operating procedures and taken corrective actions to address many of the findings, but, some findings remain outstanding and need capital construction.

This project will address the remaining findings in the support buildings to include:

The RWF has four water systems consisting of potable water, groundwater, process water, and fire protection water. Many components of the water systems are now beyond their useful life, and require frequent repairs due to leaks and failures. Additionally, changes to RWF water uses and demands require modifications to the existing systems. The filtration process is one of the final steps in wastewater treatment. The RWF’s tertiary filtration unit process consists of 16 granular media filters and ancillary equipment. Built in the 1970's and 1980's these components are near the end of their useful lives. Structural, mechanical, electrical, and instrumentation/control elements of the system need rehabilitation.

The main project components are:

When raw wastewater enters the RWF, it first goes to the headworks facility to remove debris and grit. This pretreatment enhances and protects downstream processes. The RWF has two separate headworks facilities. The original Headworks 1 has been in operation for more than 50 years and has a rated capacity of 271 million gallons per day (MGD). In 2008, the City commissioned Headworks 2 with a rated capacity of 160 MGD, to supplement Headworks 1 in response to a 1998 storm event.

With the aging Headworks 1 facility requiring frequent repairs and rehabilitation, City evaluations have identified the need for a new Headworks 3 facility, to replace Headworks 1. Also identified were modifications to Headworks 2 to improve operational reliability and performance.

This project is delivered through the progressive design-build method and is predicated on the criteria that:

Most of the RWF HVAC equipment are original to the buildings built 30 to 50 years ago and function at a minimum level of reliability. The existing equipment are also not energy efficient, and parts are no longer available to repair aging units. Additionally, as portions of the older buildings have been decommissioned, there are advantages to replacing the existing HVAC equipment with new energy efficient units to serve the repurposed spaces.

The project scope includes installation of:

Clarifiers are at the core of the RWF's biological nutrient removal (BNR) process, separating solids (sludge) from the process effluent. The 16 existing clarifiers were constructed in the 1970's and 1980's and are near the end of useful life. This project will make cost-effective improvements to enhance the clarifiers’ efficiency and minimize unscheduled maintenance on them for the next 30 years.

Phase 2 will rehabilitate the remaining eight clarifiers and up to eight of the remaining RAS pipelines. This Phase has not yet been initiated. 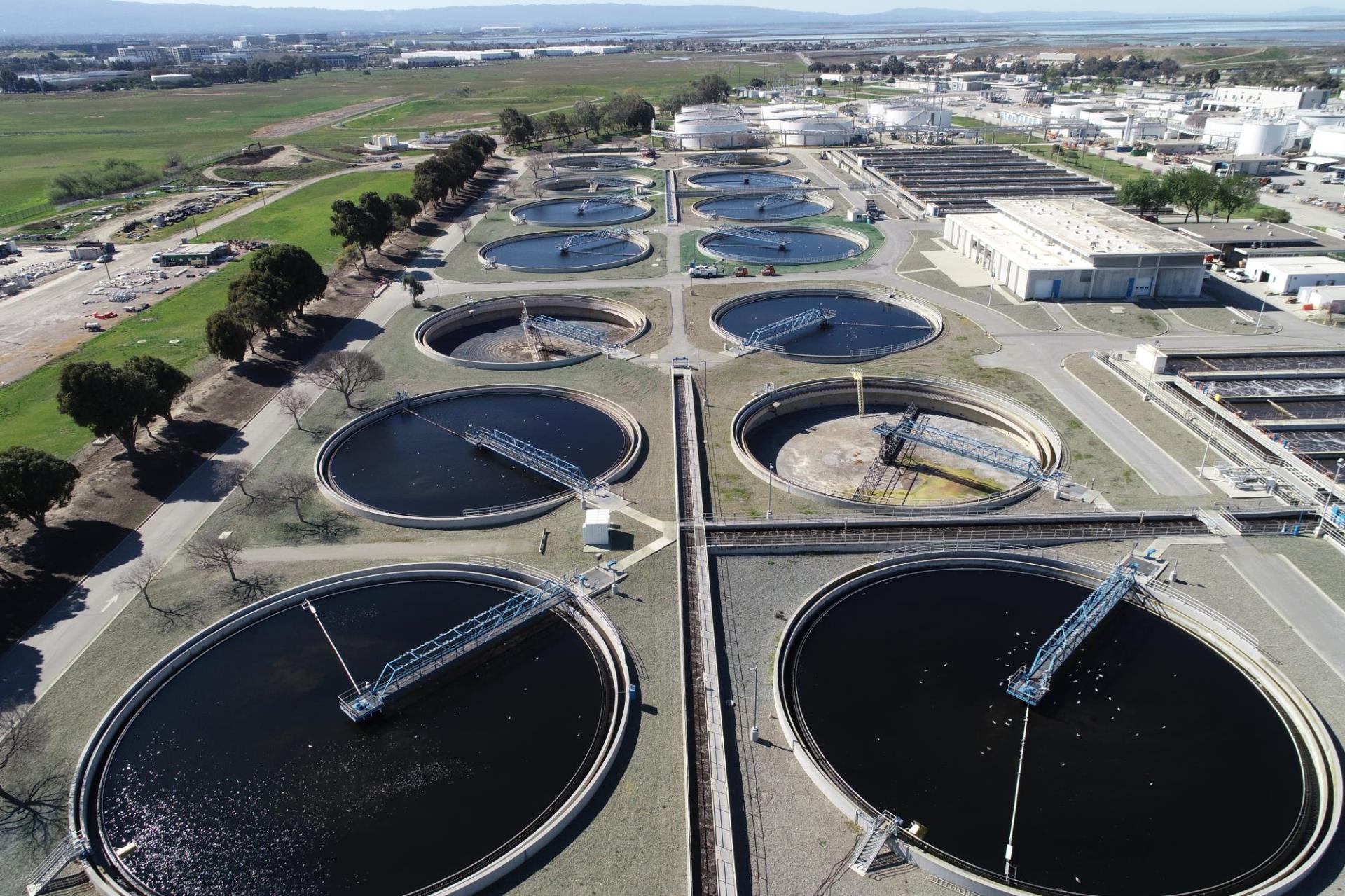 The RWF is located within a Federal Emergency Management Agency (FEMA) flood zone and is vulnerable to both regional and localized flooding. A 2015 Flood Protection Study identified deficiencies in the RWF's existing storm drain system. Subsequent condition assessments have confirmed these deficiencies. And, alternative analyses have identified options for protecting critical infrastructure, access routes, and staff.

For the last 10 years, the RWF has been implementing the Electrical Reliability Improvement Project to strengthen the RWF electrical distribution system. To date, the RWF has replaced switchgears M1 and M3, and added switchgear M5 to form an electrical ring bus with the existing M4 switchgear. The M4 switchgear is more than 30 years old and has reached the end of its useful life cycle. Also, anticipated future increases in RWF electrical load, require upgrading the electric current flow capacity on the M4 breakers from 2,000-amp to 3,000-amp. 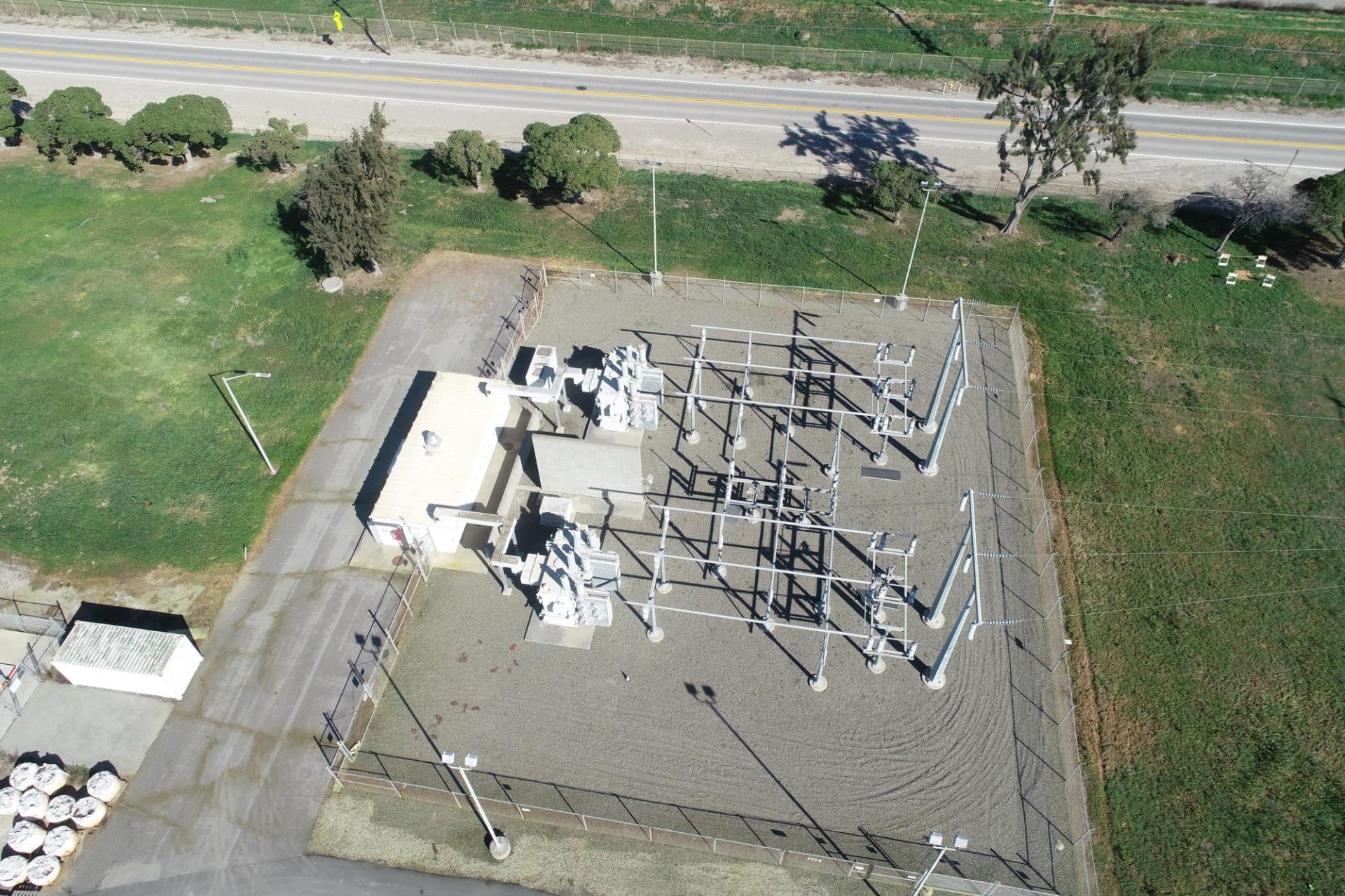 A 2015 desktop study of the process pipes identified 16 pipe systems, totaling 21,000 LF, that are at high-risk of failure. Subsequent condition assessments confirmed that two of the highest priority pipes - the 78-inch settled sewage (SES) and the 96-inch SES pipes showed evidence of severe crown corrosion. Due to the severity of deterioration and the criticality of these pipe segments, the City decided to expedite their rehabilitation under separate projects. The 78-inch SES was rehabilitated in 2018 under the Digester and Thickener Facility Upgrade project. And the 96-inch and 87-inch X 136-inch Settled Sewage Pipe project will repair two critical, large diameter primary effluent pipes in summer 2020. 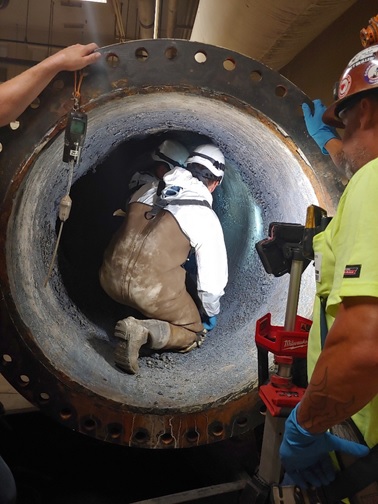 Additionally, the City decided to phase the rehabilitation of remaining high-priority pipes. Phase 1 is currently underway and will repair and replace portions of the 78-inch, 84-inch, and 96-inch Primary Effluent (PE) pipes, and the 24-inch return activated sludge (RAS) pipe.

Groundbreaking on the Headworks project

Please view our CIP Upcoming Procurements document for a list of projects being solicited for design and construction.

Budgets, including source and use of funds and project details and timelines