The Playa to Paseo partnership with Burning Man Project will bring temporary, interactive artworks to public spaces throughout San Jose. Below is a description of the artwork featured in the series to date. 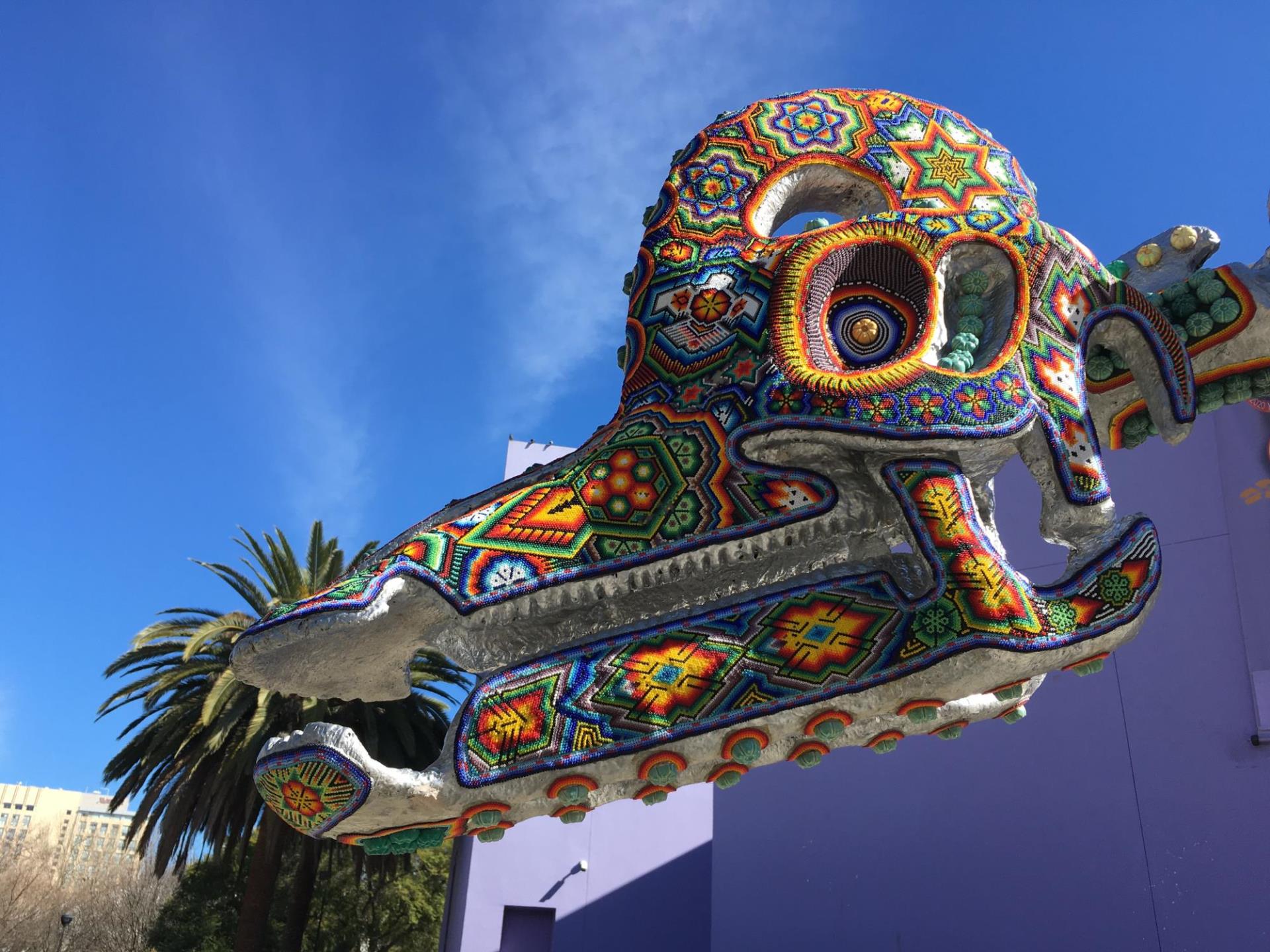 Ichiro Sacred Beings, is a life-size replica of a Velafrons Coahuilensis dinosaur skeleton covered in the bead artwork of the indigenous Huichol people. The Velafrons Coahuilensis lived 72 million years ago on the same land now inhabited by the Huichol in the desert of Northeast Mexico. The Huichol artwork decorating the dinosaur skeleton has prevailed through the ages as a visual record of sacred religious traditions and is used to pass on ancestral wisdom from generation to generation. Ichiro Sacred Beings will be on view at Children’s Discovery Museum until November 1, 2020. 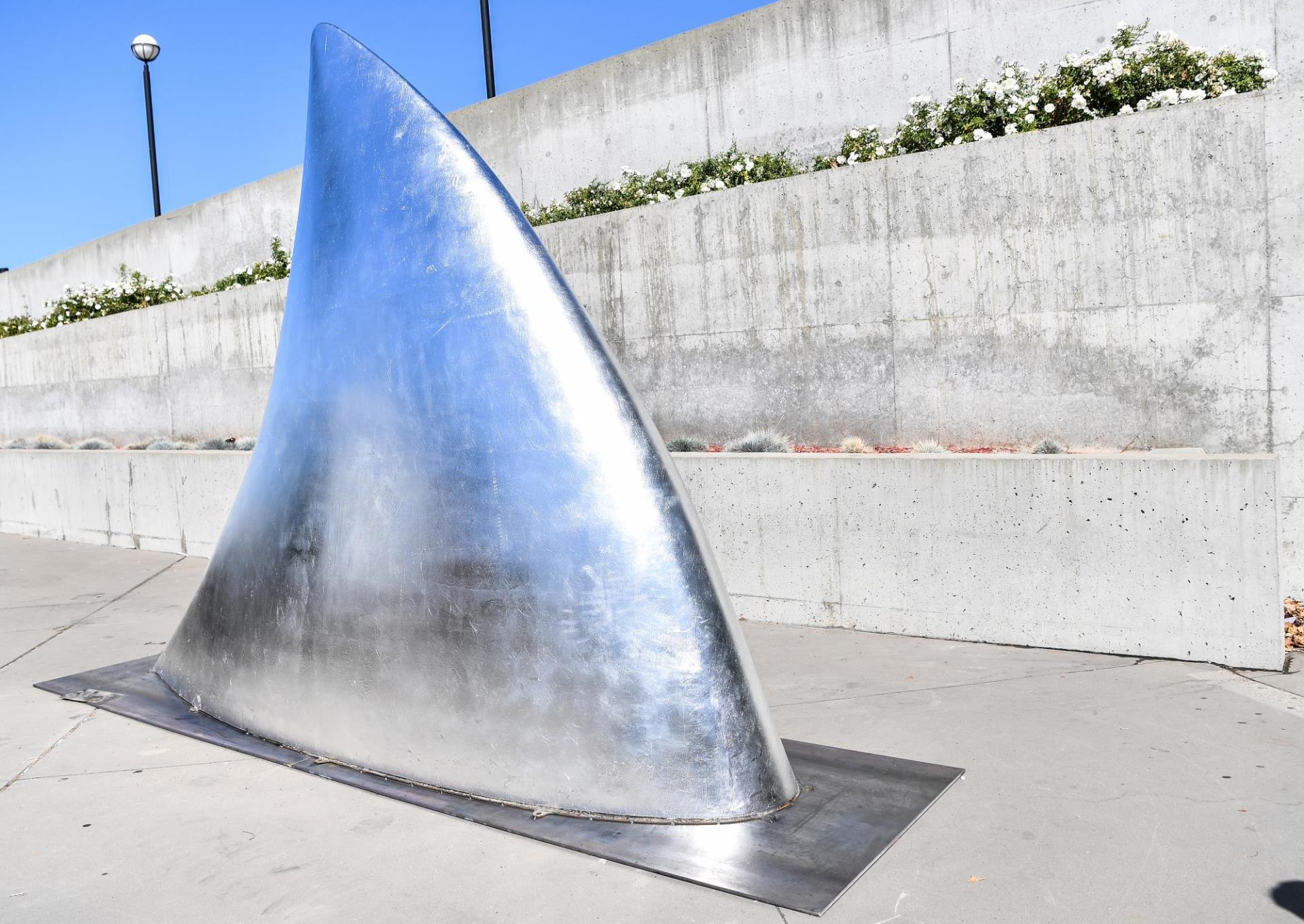 Installed in front of the SAP Center, No Swimming is a 12-foot tall shark fin with an aluminum leaf finish. This conceptual artwork is a visual symbol of awareness about the human impact on nature and our interconnectedness with our environment. Technological progress is often met with excitement for future possibilities and an equal amount of fear for unintended consequences. In terms of this duality, our relationship with technology mirrors our relationship with nature. The shark is a powerful and emotionally compelling symbol for us. We respect and fear it. No Swimming is reminder that even as humans increasingly dominate nature, we are still a part of it. No Swimming will be on view through April 4, 2020. 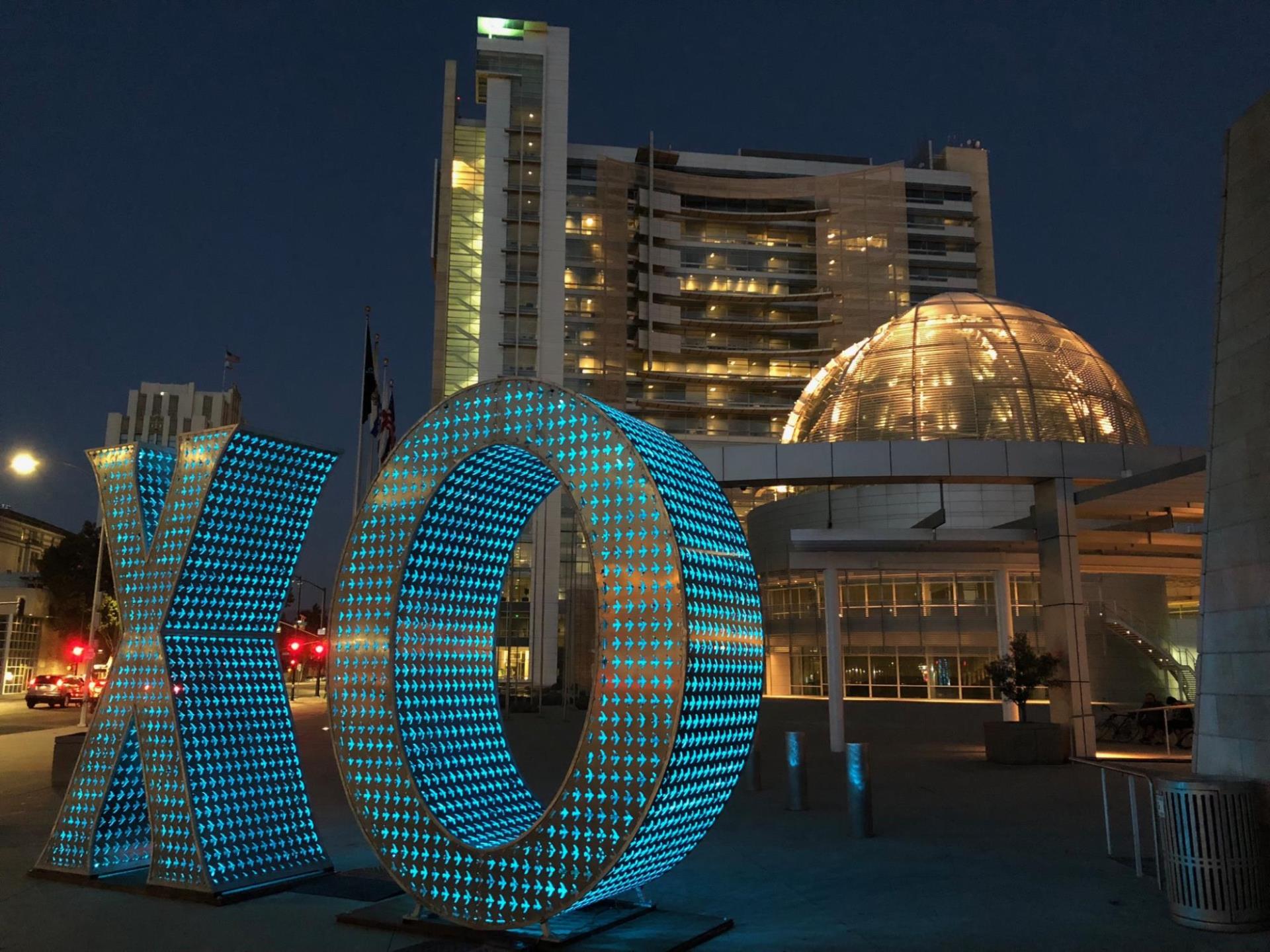 By Laura Kimpton and Jeff Schomberg

Installed at San Jose City Hall, XO stands 12 feet tall and is made of aluminum. XO is a love letter to the community; an expression of affection and love, the letters "xo" are now in popular use as a sign-off on letters, emails, and text messages. Originally presented by the artist as XOXO, the artwork was split into two XO elements; the "other" XO is presently on display at the Smithsonian in Washington DC as part of the exhibition No Spectators: The Art of Burning Man. The XO in San Jose was on view between November 2018 and May 2019. 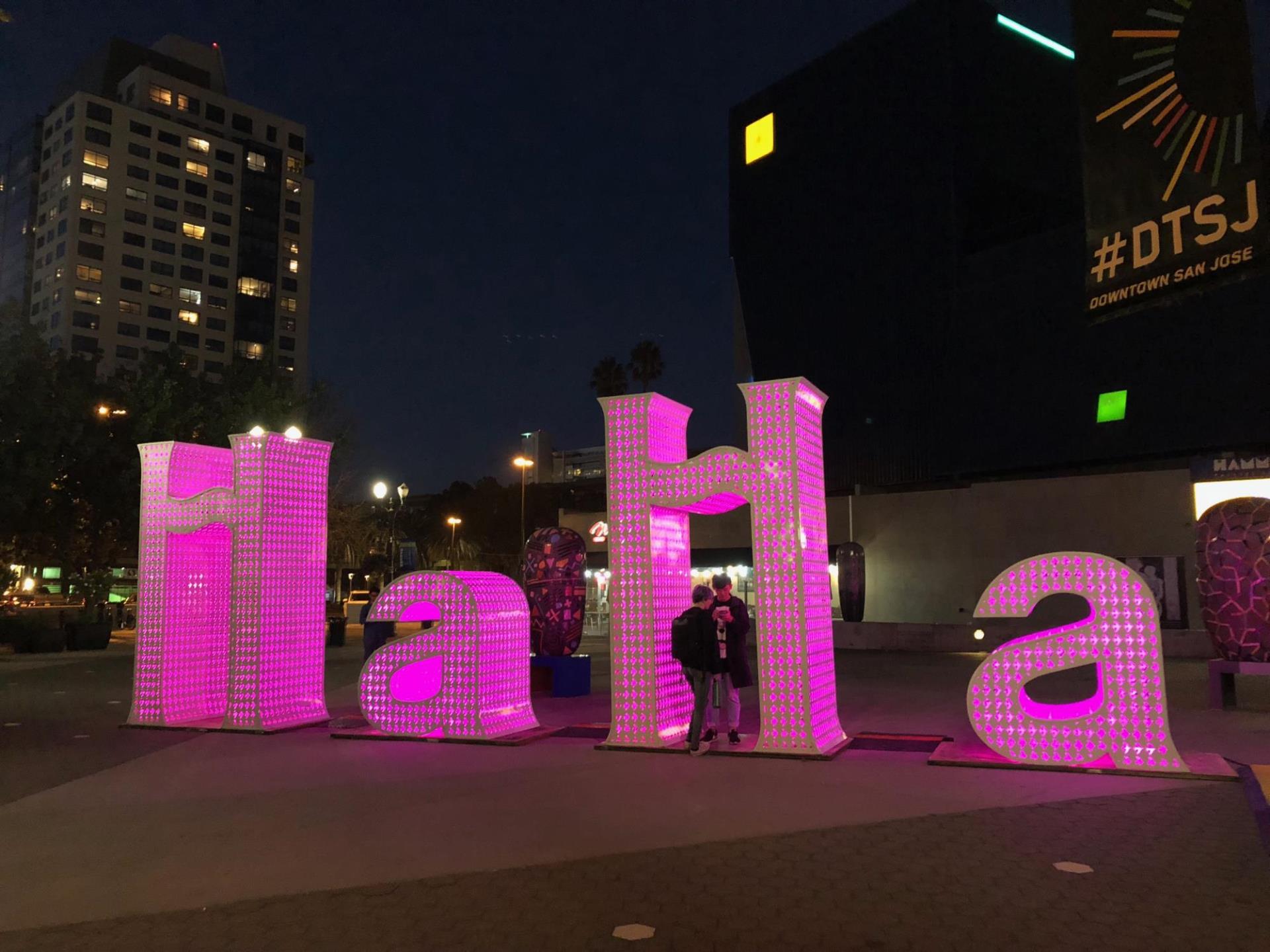 By Laura Kimpton and Jeff Schomberg

Installed at Hammer Theatre Plaza, the "H's" in HaHa stand 12 feet tall and the "a's" stand 6 feet tall. HaHa is a celebration of life in tribute to the late Burning Man Founder Larry Harvey who passed away this spring, and as well of loved ones who have departed before us. Kimpton says, "It is a reminder to celebrate the time we had with them. To raise our proverbial glass in celebration to all they did to create this wonderful, joyful life we have as part of Burning Man." HaHa's placement at Hammer Theatre Plaza also speaks to the power of art to bring joy and laughter to people's lives. The HaHa was on view between November 2018 and May 2019. 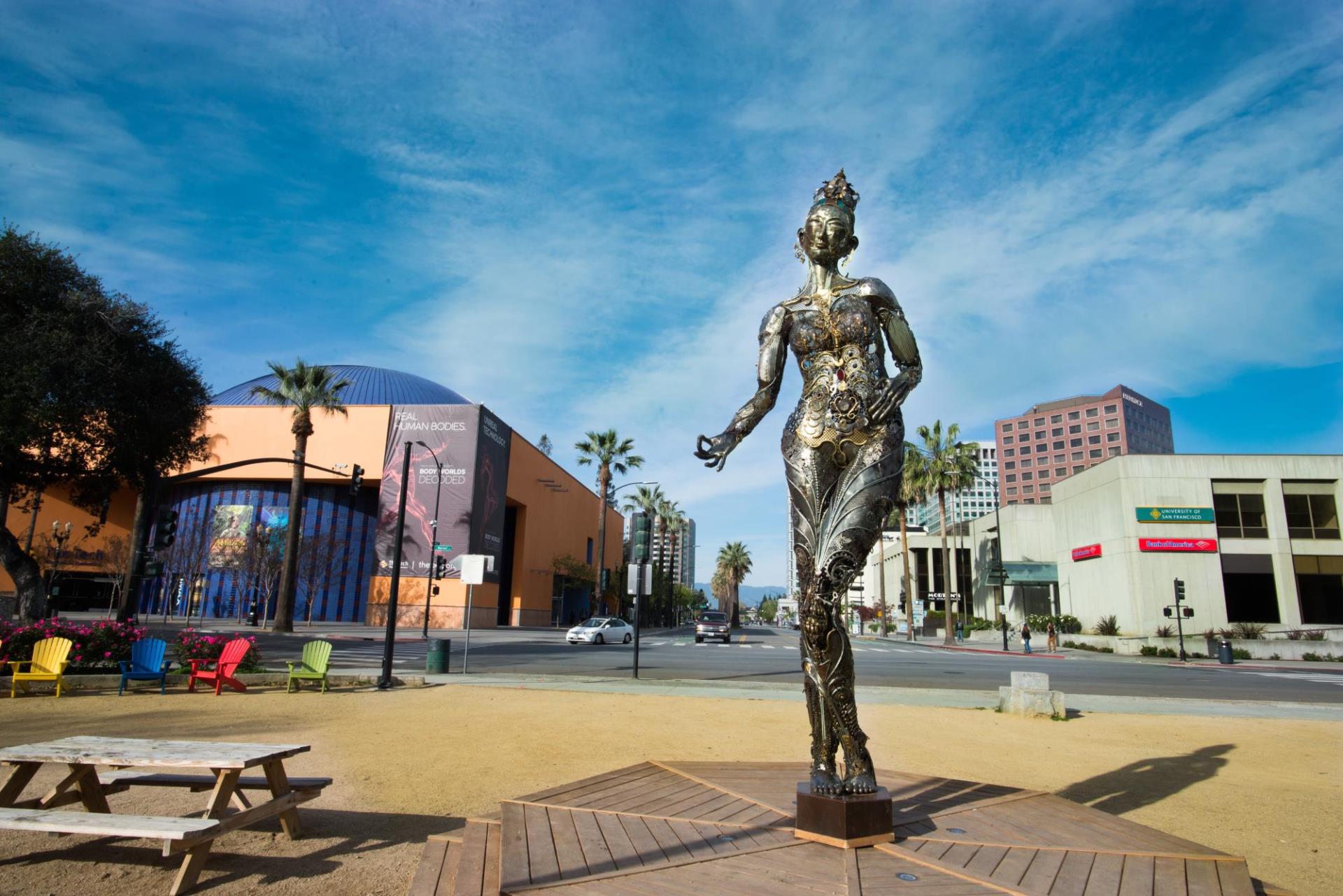 Installed in Plaza de Caesar Chavez, Tara Mechani stands 15 feet high and is created from non-traditional materials including bicycle gears and machine parts. The artwork entwines aspects of the female Buddha, Tara, with the characteristics of a futuristic female robot. She is a reminder to embrace the future without losing sight of past beauty and ancient wisdom. Tara Mechani was on view in Plaza de Caesar Chavez from April to August 2018. 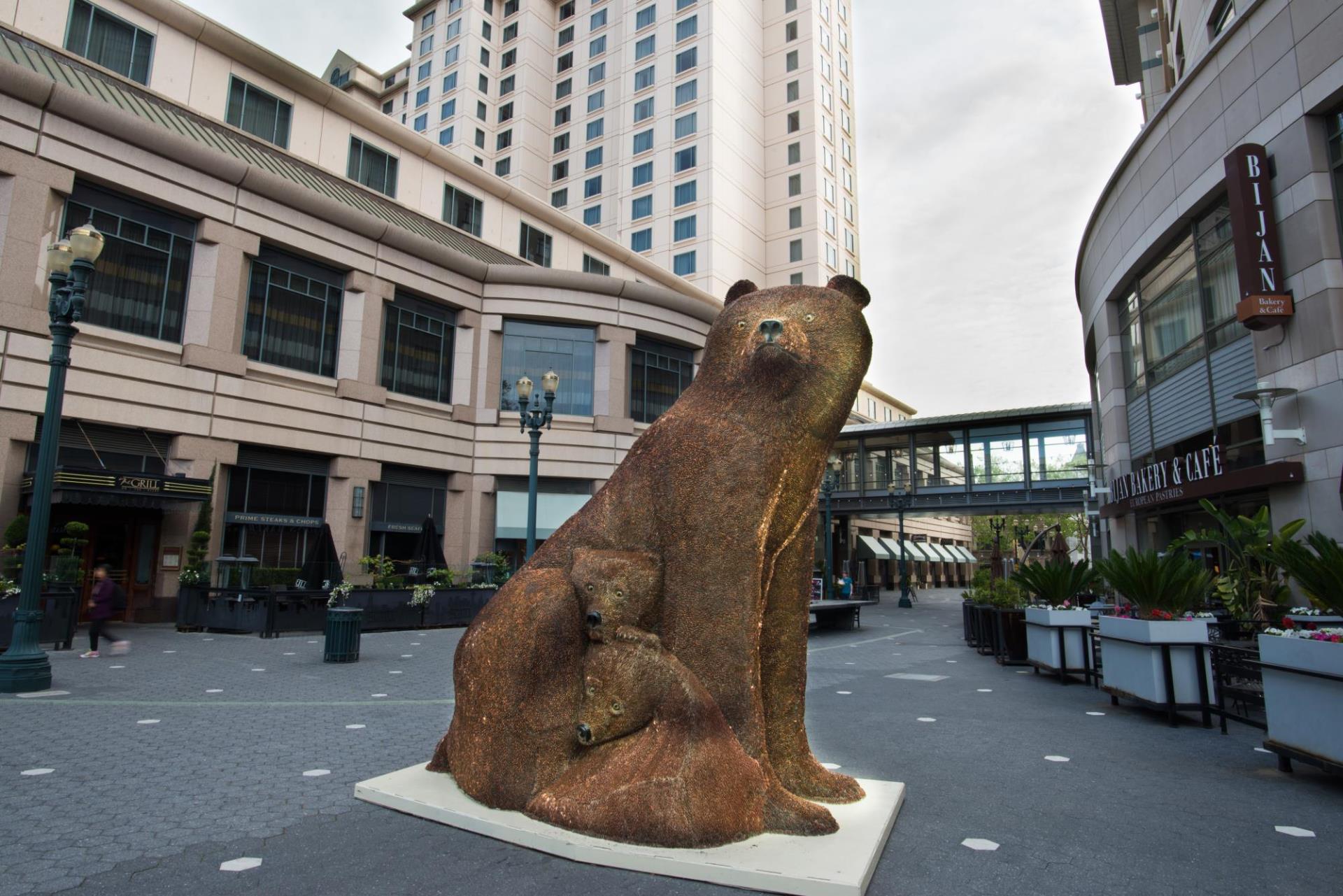 by Mr. and Mrs. Ferguson

Installed in Paseo de San Antonio near the Fairmont Hotel, Ursa Mater is a 14-foot sculpture of a mother bear and cubs by the artist duo, Mr. and Mrs. Ferguson. Ursa Mater's fur is made entirely out pennies, giving the bear family a soft, coppery sparkle. This artwork was on view from March to May 2018. 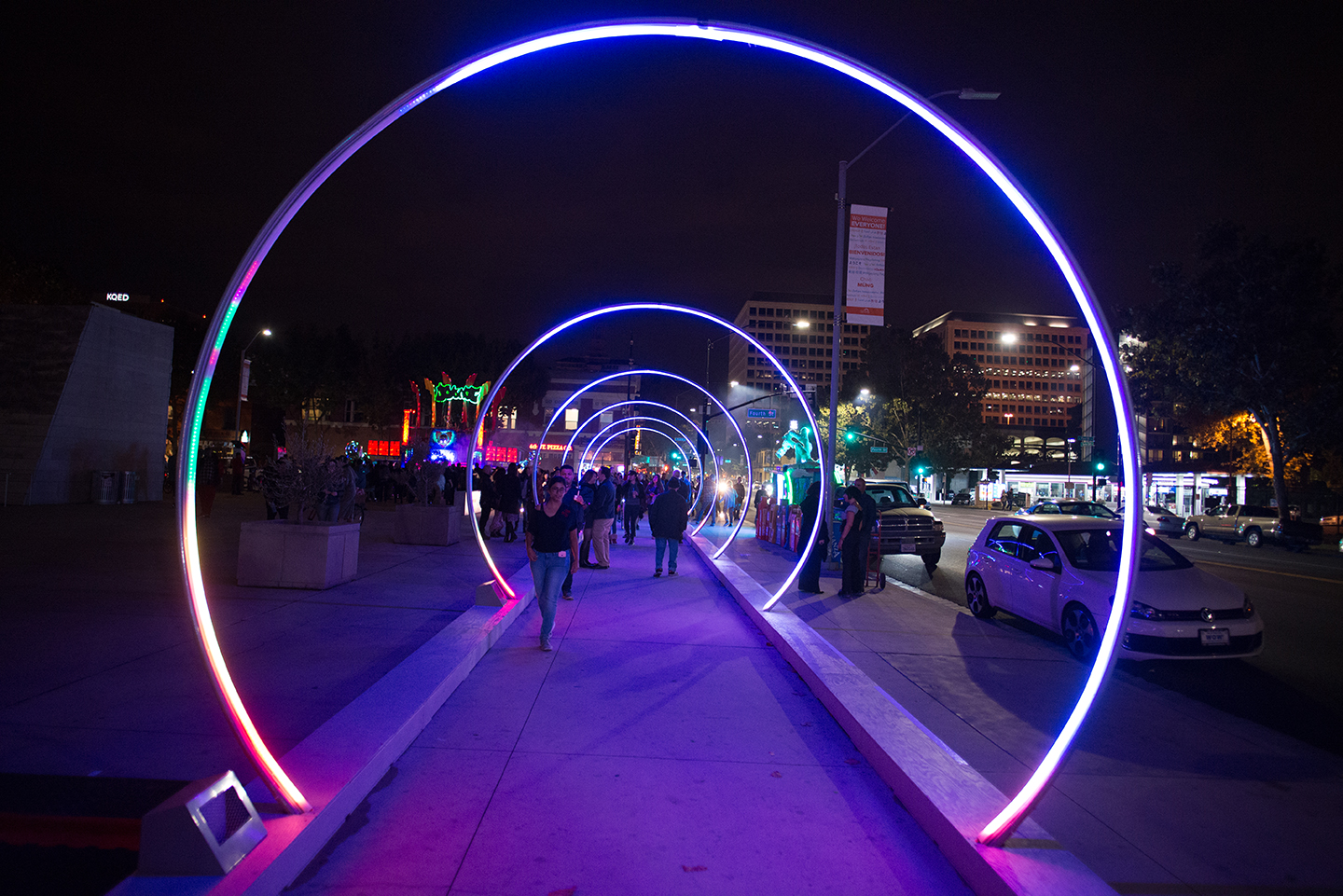 by Rob Jensen and Warren Trezevant

The first installation in the partnership with Burning Man Project, Sonic Runway, was on view at San Jose City Hall From November 3, 2017 to March 9, 2018. Sonic Runway is a light-art installation that visualizes the speed of sound. Created by Rob Jensen and Warren Trezevant, Sonic Runway converts audio signals into light patterns that shoot down a corridor of arches at the speed of sound. Standing at the front of the Runway, the beats of music visually ripple away from you. Looking back from the far end, you can watch the sound coming towards you and hear the music just as the patterns reach you. This artwork was first installed at the Burning Man event in Black Rock City in 2016.