Join us in creating the Berryessa BART Urban Village Area Plan that will guide future development within this urban village. San José's first BART station (Berryessa/North San José) will open in the heart of this urban village. The area is envisioned with mixed-use commercial and residential development, including high-density residential projects. To help create a walkable area that is accessible to all users, we're following the principles of the Transit-Oriented Development (TOD) initiatives and the Smart Growth strategies of the Envision San José 2040 General Plan.

Planning an urban village consists of background research on the existing area, identifying the best practices for Transit Oriented Development, and addressing concerns of all stakeholders. To engage the public and enable input, we are having three Community Workshops:

The first workshop was held November 15, 2018, and over 100 community members attended. The presentation that was shown at the workshop is available, along with the summary of the input received from each table.

The community was invited to share thoughts and ideas about this urban village through a Berryessa BART Urban Village Online Survey. The survey was open in anticipation of the Workshop in November 2018 and closed in Spring 2019. All comments were processed and will remain anonymous.

The second workshop was held on May 2, 2019 and had over 80 community members in attendance. The City presented the Concept Plans for the area in this workshop, including land use, circulation, open space, placemaking and other information. City staff and the consultant team developed Concept Plans with input received from the first community workshop and comments received in the first online survey.

A second online survey was available for community members to share their thoughts and ideas on the Concept Plans. The survey was open from April 2019 until May 2019, overlapping with the workshop. All comments were processed and will remain anonymous.

View the summary of the second workshop input and online survey results.

With input from Workshop 2, City staff will prepare a draft of the Berryessa BART Urban Village plan including all proposed City policies in support of such plan.

Within the City of San José, the Berryessa BART Urban Village is located in the central part of the City, in an area generally bounded by the US Highway 101, the Interstate 680, and the Interstate 880. The actual boundaries of the Urban Village are generally Shore Drive to the north, Lundy Avenue to the east, Coyote Creek to the west, and Mabury Road to the south. The Berryessa BART Station is located in the center of the Urban Village. 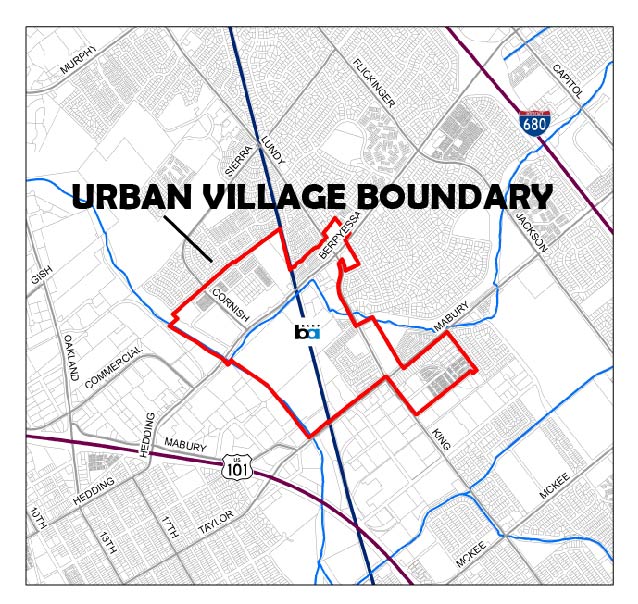 About the Berryessa BART Urban Village

The Berryessa BART Urban Village surrounds the future Berryessa/North San José BART station, which is projected to host 25,000 riders daily by 2030 and is the first BART station in the City of San José.

Currently, this area consists of detached houses, townhouses, and small apartments; small retail plazas at the corner of Berryessa Road and Lundy Avenue; and the San José Flea Market south of the BART station.

The Berryessa BART Urban Village includes the future redevelopment of the San José Flea Market. The north side of original Flea Market site has already been developed, but the south side of the site, where the Flea Market operates today, is a key opportunity to shape this urban village.

The City is currently analyzing a development proposal for this site as part of “Application PCD17-051 Southside Rezoning Project.” Information regarding the environmental review of this project is also available.

What is an urban village?
Urban villages bring housing, retail, and jobs together with higher-density, mixed-used developments. They typically locate along transit corridors to reduce car use and promote walking, bicycling, and transit use.

What are the benefits of an urban village?
Instead of “urban sprawl,” urban villages provide a place for people to live, work, and play. This concentrated approach reduces traffic and greenhouse gas emissions, and supports healthy living with less time in cars. Economic development and growth is promoted in key locations, helping to take pressure off developing in environmentally sensitive areas.

What is the planned housing and job growth for Berryessa BART?

When will the BART station open?
The Santa Clara Valley Transportation Authority (VTA) estimates that the BART station will be operational by the end of 2019. Get the latest information from the VTA website.

How many people will use this BART station?
VTA predicts 25,000 daily passengers by 2030 at the Berryessa/North San José BART station. For this number of passengers, it’s critical that the Village Plan provides for a dense, transit-centric, urban environment.

What about parking and traffic?
Addressing parking and traffic is a key part of the planning process. We'll discuss direct access to U.S. Highway 101 and provision of parking for those who choose to drive. Importantly, a key goal is to make it easier for people to reach their destinations without driving. We'll consider trail improvements, safe pedestrian and cycling networks, bicycle storage, and how technology might shape our transportation options.

What will happen to the Flea Market site?
The owner of the San José Flea Market has submitted a rezoning proposal to develop the site. We hear they may be exploring options for relocating their vendors to other locations in San José. This redevelopment will be a key part of realizing the vision for this Urban Village.

How will the public be engaged in the Berryessa BART Urban Village plan?
A series of three workshops will occur between fall 2018 and fall 2019, and a Planning Commission hearing will occur in spring 2020. Upon approval by the Planning Commission, the Plan will go to City Council for final adoption.