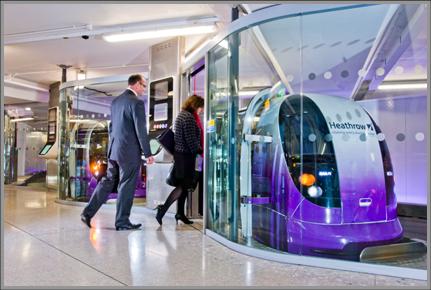 DOT is partnering with the Federal Transit Administration, and other agencies and organizations to help accelerate the development of ATNs in the United States.

What is an ATN?

ATNs are driverless vehicles operated on a separated guideway that is typically elevated. Unlike conventional transit systems, which are designed as a loop or line, ATNs serve multiple destinations over a larger service area via a variety of paths. Trains and buses typically stop at each station along a set route, according to a fixed schedule. ATNs travel point-to-point in response to passenger needs and network loads, skipping stations along the way, with generally no fixed timetable.

ATNs have the potential to improve the effectiveness of transit systems by, among other things:

In March 2017, San José released a high level assessment of the viability of constructing an Automated Guideway Transit (AGT) system connecting the San Jose Norman Y. Mineta International Airport with Diridon Station and other nearby destinations . AGTs include ATNs as well as more conventional automated transit technologies, such as Automated People Movers and automated metro systems. The study was funded by the Department of Transportation and conducted by ARUP. It concluded, among other things, that 1) there is sufficient potential demand to justify the construction and operation of an AGT system between Diridon Station and the Airport; 2) an ATN would be the most appropriate AGT technology choice given the potential demand and characteristics of the market identified in this study; and 3) that the capital cost-effectiveness of an ATN could be on par, or potentially better, than that of recently-built APM systems (e.g., Oakland Airport Connector).

In Oct 2012, San José completed a comprehensive analysis of the technical and financial feasibility of building an ATN linking nearby mass transit stations with the San Jose Norman Y. Mineta International Airport. The study, which was funded by the Santa Clara Valley Transportation Authority, concluded that ATN technology offers a lot of promise. But further development and testing is needed to confirm the technical and business cases for ATNs. The City is continuing to pursue opportunities to advance this technology and industry in Silicon Valley and the U.S.