San José has educational materials (see below) for both businesses and residents on how to prevent specific types of pollution. The Santa Clara Valley Urban Runoff Pollution Prevention Program (SCVURPPP) provides numerous resources for residents, businesses, gardeners, teachers, and students.

Stormwater Flows Directly to Our Creeks, Rivers, and Bay

In San José, approximately 30,000 storm drains carry water directly to the nearest creek without treatment. As rain water flows across rooftops, sidewalks, driveways, and streets and enters the city's storm sewer system it can pick up pollutants that can be toxic to fish, wildlife and people, such as:

The storm sewer system refers to important infrastructure that prevents flooding when it rains. The system, also known as a Municipal Separate Storm Sewer System or MS4, works to move water away from an area to a local water body, such as a creek or river. The storm sewer system includes the inlets (storm drains) and gutters on your street as well as pipes and outfalls, where the stormwater enters the water body. Because the MS4 flows directly into water bodies without any treatment it is critical to keep it pollutant free.

The City is Legally Required to Prevent Pollution to the Bay

Federal regulations require the City to protect the storm drains, creeks, and the Bay from pollution from illegal dumping and discharges. Title 15 of the San José Municipal Code gives the authority to inspect and enforce against dumping to the storm drains.

The work the City of San José does to prevent stormwater pollution is regulated under the jurisdiction of the San Francisco Bay Regional Water Quality Control Board, Region 2 (Regional Board), the enforcement arm of the State Water Resources Control Board (Water Board).

The Regional Board issues a National Pollutant Discharge Elimination (NPDES) Municipal Regional Permit (MRP) to the City of San José and 75 other co-permittees that covers stormwater activities for most of the Bay Area. Permittees in Santa Clara County, such as the City of San José and the Santa Clara Valley Water District, formed an association called SCVURPPP to meet MRP permit regulations by sharing resources and collaborating on projects of mutual benefit. The MRP permit governs a variety of activities in the City of San José such as industrial and commercial businesses, new and redevelopment projects, construction sites, storm drain operation and maintenance, creek monitoring, pesticide applications, and illegal dumping of water and other pollution in the City’s storm drain.

Under the permit, San José has a Stormwater Management Plan outlining proposed activities necessary to protect our creeks and rivers from polluted stormwater runoff. The City also prepares an Annual Report that evaluates progress during that fiscal year. Both documents are approved by the City Council prior to their submittal to the Regional Board. 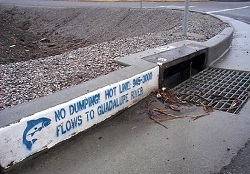