The purchase of the Evergreen system was made with loans from the City’s General Fund. These loans were repaid with interest by 1970, and the MWS has been completely self-supporting ever since.

Today, the MWS supplies water to more than 100,000 people and is the fourth-largest water retailer in Santa Clara County. The MWS has some of the lowest water rates in the San Francisco Bay Area, and provides a safe and reliable water supply to customers. 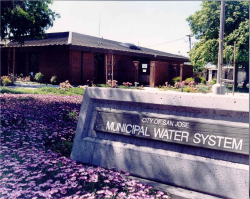