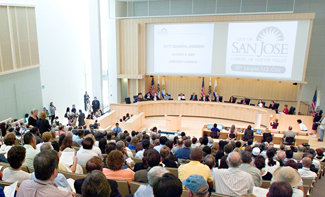 The City of San José operates under a council-manager governance structure. This system combines the policy leadership of elected officials on the City Council with the managerial expertise of an appointed city manager.

Under the City Charter, the Mayor is responsible for recommending policy, program, and budget priorities to the City Council, which in turn approves policy direction for the City. The City Charter limits the Mayor and Councilmembers from serving more than two consecutive terms in those offices.

City Manager
The City Manager serves as the chief administrative officer of the organization. The City Manager is responsible for administering City operations and staff, advising the City Council, managing the day-to-day delivery of public services, and implementing Council policies.

City Clerk
The City Clerk ensures that Council actions are in compliance with all federal, state and local statutes and regulations and that all actions are properly executed, recorded, and archived.

City Auditor
The Office of the City Auditor independently assesses and reports on City operations and services. It conducts performance audits that identify ways to strengthen public accountability and improve the efficiency and effectiveness of City government.

Government in Action
Council meetings begin at 1:30 p.m. on Tuesdays. In addition, on the first and third Tuesdays, there are evening meetings that begin at 7:00 p.m. Council meetings can be seen on Comcast Cable Channel 26 in San José, or viewed online.

If there are issues that you wish to bring to the attention of the Mayor or the councilmember representing the district where you live, visit the City Council page to contact them. If you are unsure which Council district you reside in, check the map of Council districts.